Ms. Valencia Nelson was a giant in research for African Americans. Her Afrigeneas.com website and list serv have been used by untold people. May she rest in power with the ancestors. Click on the link to learn more about her extraordinary life. She will be missed. Prayers to her friends and family. http://www.afrigeneas.com/forum/index.cgi/md/read/id/88647

Did you miss the show “Roots tracing for African Americans” with Nichelle M. Hayes?
Click here to listen to the podcast https://t.e2ma.net/click/1kxrehb/pbywvjc/h9azxxk

Even with renewed, widespread interest in family history research – and the explosion of genealogical tools in recent years – challenges remain for those researching African American ancestry. Many of the challenges involve ancestors who were enslaved during the 19th century and earlier.

As Hoosier History Live salutes Black History Month, Nelson’s studio guest will be one of Indiana’s top experts on African American roots-tracing. Indianapolis-based genealogist and librarian Nichelle M. Hayes is a past president of the Indiana African American Genealogy Group. Currently, she is the leader of the Center for Black Literature and Culture of the Indianapolis Public Library. Nelson will be asking Nichelle to share advice and tips for tracing African American family histories. As a genealogist for more than 25 years, Nichelle conducts workshops about African American family history research and blogs about it and related topics.In a recent blog post, Nichelle described her research into the death in 1933 of a great-aunt who lived in the Brightwood neighborhood of Indianapolis and died of tuberculosis. Information on the death certificate opened doors for Nichelle to learn about her ancestor’s civic life.

“Genealogy is more than just birth and death dates,” Nichelle writes. “It’s fleshing the person out, so to speak.”To people beginning family history research, she recommends: “Start with yourself and work backwards.”In addition to examining U.S. Census data, records related to property ownership, probate and pensions also can be extremely helpful in illuminating the lives of ancestors, Nichelle says.Among the resource books she recommends to African Americans are Black Roots: A Beginner’s Guide to Tracing the African American Family Tree (Simon & Schuster, 2001) and A Genealogist’s Guide to Discovering your African-American Ancestors (Genealogical Publishing Co., 2003).Ancestory.com, another resource popular with genealogists for its extensive database of family tree information, has published Finding Your African American Ancestors: A Beginner’s Guide (2001).With Nichelle on hand to respond to questions from listeners embarking on roots-tracing adventures, we will open our phone lines earlier than usual during this show. The call-in number to the WICR-FM studio is 317-788-3314.

Dig up ancestral burial information from millions of tombstone images here. Search by an individual or cemetery name. Users are encouraged to upload additional tombstone photos and submit biographical information for memorial pages. You can even create virtual cemeteries to connect loved ones buried in different places.  I was able to find my paternal grandmother using this site. I also found the headstone of a civil war soldier. We were blessed that the Company and Regiment were marked on the grave.

This is the last  day of the review of my top 9 genealogical websites.e Thanks for hanging in there with me and reading all the posts.   Please continue to share what you are learning from the reviews of the websites. Or maybe you have a website that you think SHOULD have made the list. Feel free to leave a comment.

This is one of the best free online resources available. Search millions of digitized and indexed records from around the world. Some results point to offsite sources for digitized records. Don’t ignore the Learn tab; it’s packed with keyword-searchable articles and online courses. The Catalog tab takes you to the most extensive genealogy library catalog in the world. Microfilmed holdings can be rented for use at a FamilySearch Center near you (see the FamilySearch Centers tab). Share your family tree at the bottom of the home page; learn how you can contribute to online records access under the Indexing tab.

This is day 8.  Including today’s post, we have 2 resources to go. I would love to hear what you are learning from the reviews of the websites. Or maybe you have a website that you think SHOULD have made the list. Feel free to leave a comment.

Consider Cyndi Howells’ site your table of contents for online genealogy. You’ll find lists of sites dedicated to researching particular places, types of records, ethnic and religious groups, and more. Check out the Beginner’s category for guides and tips just for newbies. 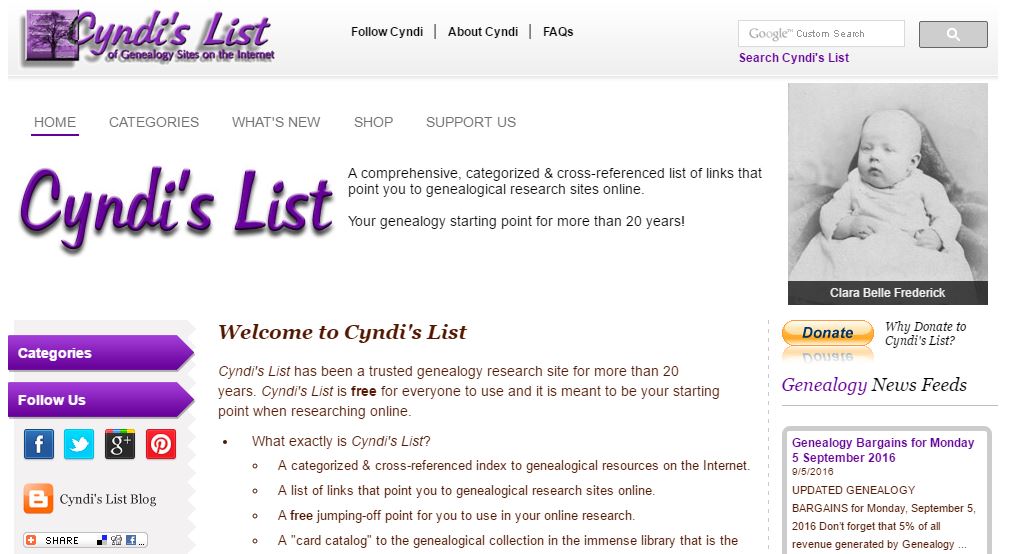 This is day 7.  Cyndi’s List is an amazing resource that is constantly growing and being update. Review the site and see what resources can benefit from. Continue to build your toolkit. There’s an old saying, “If you only have a hammer, everything looks like a nail.” Meaning that if you only have one tool, that’s the only one you can use. You can’t hammer everything, somethings need screwdrivers, etc. There’s a tool for every problem.  Feel free to share your insights on any and all of the websites. It will help me and others to learn about aspects we might not been aware of.

The most comprehensive resource for locating vital records. This site will show you to how to obtain vital records (such as birth certificates, death records, marriage licenses, divorce decrees, naturalization, adoption and land records) from each state, territory and county of the United States. See the guidelines for information on how to order vital records. If you are looking for vital records from a foreign county, see links to international vital records web sites.

Access contact information for each state’s vital records office to request Vital Records (birth, death) from across the United States.

This is day 4.  I hope you are enjoying the resources. Vitalrec happens to be one of my favorite websites. It makes it very easy to find out costs and contact info when you are researching in different states. Feel free to share your insights any and all of the websites. It will help me and others to about aspects we might not been aware of.

Take time to check out this wonderful resource. Do you wish you could attend a great genealogy fair, but you lack the time and money. Well here’s your chance. This fair is as close as your nearest wifi connection.

Visit  the National Archives for the 2014 Virtual Genealogy Fair on October 28, 29, & 30, starting daily at 10 a.m. eastern time. This will be a live broadcast via the Internet so you can ask our genealogy experts questions at the end of their talks. The entire event is free and open to all, so there is no registration.

There will also be content of specific interest to individuals searching for African-American ancestors. For more info on one of these presentations go to http://blogs.archives.gov/blackhistoryblog/2014/10/28/2014-genealogy-fair/

I’m excited! I can’t wait to see what great information I’ll be able to glean.

The Ties That Bind
Blog at WordPress.com.