This month on the 20th of July would have been the 100th birthday of my beloved Great Uncle Ralph Edwards. He went home to be with the Lord on January 30, 2013 at the seasoned age of 97 years old. He was the Pastor of my church and a quiet and steady influence on our family.

Uncle Ralph was born in Indiana  and raised in Kentucky. He was the oldest child born to Elonzie &  Eva. The oldest brother of Bloyd.

He was baptized as a teenager in Kentucky.  For many years he was a singer in a traveling gospel group.  He was also active in a Masonic lodge in Indianapolis.

He retired from Chevrolet Motor Company after 28 years.

He joined a local church, New Mission Missionary Baptist Church, in the 1950’s as an ordained deacon, under the pastorate of Rev. Thomas Cleveland, Sr., his father in law.   He and other church members helped to build the current church building during its first major renovation. Rev. Edwards acknowledged his call to the ministry in 1963 and preached his first sermon in January 1964. He served diligently as the assistant pastor of New Mission Missionary Baptist Church, for many years.  Later he graduated from the Central Baptist Theological Seminary with his Bachelors of Theology degree.

Rev. Edwards was called to pastor New Mission Missionary Baptist Church in December 1996. He was ordained as Pastor on April 13, 1997. During that time he led his flock as a distinguished man of God. Pastor Edwards served in this capacity until he was called home to be with the Lord. He was known as a Christian man with a quiet strength and humble spirit.

Uncle Ralph (he’s my uncle-in-law growing up I didn’t know that term) married my Aunt Zet and lived their entire married life in Indianapolis where they nurtured their son, granddaughter and grandson as well as the extended family.

His  Favorite Bible Passages were:  Psalm 24 & Psalm 150. His Favorite Hymn was Amazing Grace. He would often sing this while he stood in the Pulpit.

Uncle Ralph Edwards was called home to be with the Lord on January 30, 2013 after an extended illness. During that time of his illness he remained faithful to the Lord. He would often say when being asked how he felt, “Like Paul I am pressing on toward the mark for the high calling of Christ Jesus and I won’t complain.” I often reflect on those words when I’m feeling overwhelmed and tired. Uncle Ralph showed our family us by his example the importance of hard work, loyalty and faith.  Uncle Ralph is gone but not forgotten. He is missed. 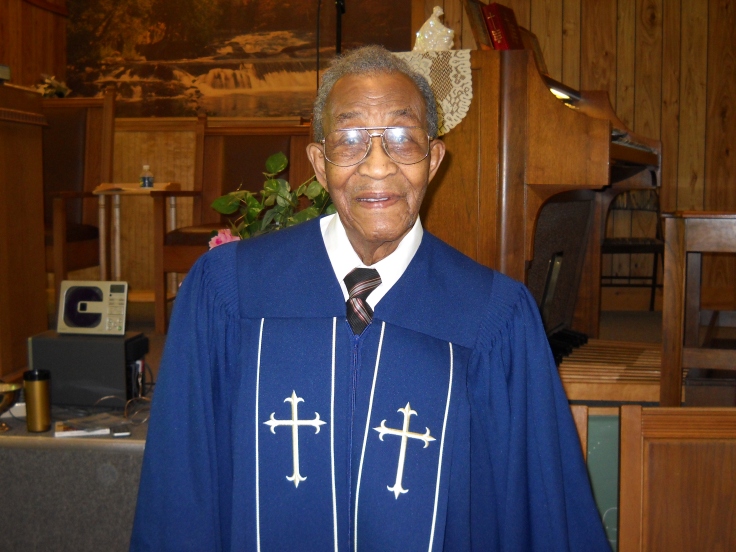